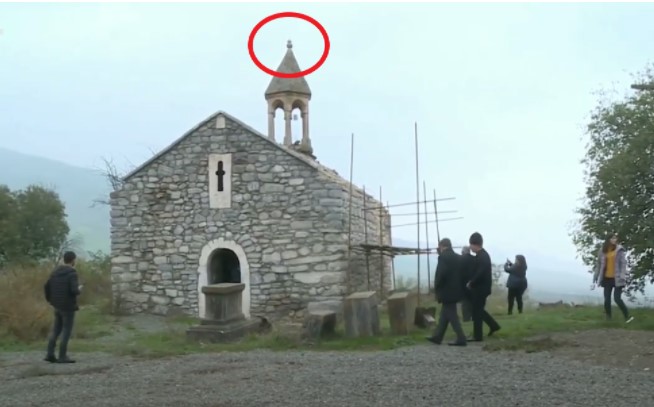 Having the example of Turkey, Azerbaijan consistently continues the policy of destroying cultural heritage and Armenian traces in the occupied territories of the Republic of Artsakh.

To the examples of cultural genocide, carried out by Azerbaijan since the end of 2020 in the occupied territories of Artsakh, we can add the church of the “Spitak Khach” (White Cross) in the village of Vank, Hadrut region.

From the video, which was well spread in the Azerbaijani segment of social media, it becomes clear that the Azerbaijanis removed the cross from the church. Under the pretext of reconstruction, the Azerbaijani side, in addition to the cross, also destroyed the roof of the church. This way, Azerbaijan tries to fully erase the trace of Armenian culture in the region and present the next Armenian church as “Udi church”, despite the fact that the inscriptions (cross-stone) on the walls and on the khachkars of the church are in Armenian.

The proof of the above is that, at the beginning of November 2021, Azerbaijan organized a visit to the church for the representatives of the clergy of the Udi community. During the visit, the church was presented as a “monument of Albano-Udi culture”, which has nothing in common with reality. Karabakh Records reports.

The exact date of the foundation of the church is not known. The oldest inscription dates back to the 14th century. The inscription was preserved inside the church under the north arch. It says, “Me, Sirа, erected this khachkar for my father, Khutlap, in the year of 1333.”

Another preserved inscription states, “It was built in 1735. This was the year of Tahmasp Qoli Khan. The bell tower was built in memory of Bishop Avanes, the son of Surap.” This, most likely, is the year of the reconstruction of the church bell tower.

The monastery consists of a church, a vestibule, a guest house, carved cells, a cemetery, and a walled khachkar. The walled khachkar has a special place in the territory of the church. The width of the monument is 290 cm, the thickness is 230 cm, and the height is almost 4 meters.

The monument represents the theme of the “Second Coming of the Cross”: two angels are carrying the cross. This theme has been popular in khachkar culture since the 12th century. The inscription about the erection of the khachkar is carved on the main semi-arched stone of the monument.

“Me, Ajami, the son of Ishkhan, erected this cross for the salvation of the soul of my son Asudar. As you read the inscription, remember him in your sacred prayers, I beg. In the year 1346.”